An unheralded colt foaled near Oakey on the Darling Downs in 1939, Bernborough was destined to become one of the most intriquing and inspiring stories of the Australian turf.

More has been written about Bernborough than any other horse to come from Queensland. After having his early career restricted to racing in Toowoomba he went south and won 15 races in succession before breaking down in the 1946 Mackinnon Stakes.

Bernborough is the only horse to have won the Doomben 10,000 and Doomben Cup in the same year (1946). His racetrack feats from 1942 to 1946 captured the hearts of all Australians during the gloomy and testing days of World War 2.

After Bernborough broke down in the Mackinnon Stakes he was purchased by American Louis B Mayer, of MGM movie fame, for the highest price ever paid for an imported stallion. Bernborough stood at Mayer’s Spendthrift stud in Kentucky where he sired numerous winners. A stud veterinary surgeon estimated that Bernborough’s heart was larger than his legendary predecessor Phar Lap.

The following are some random tributes paid to the mighty horse: 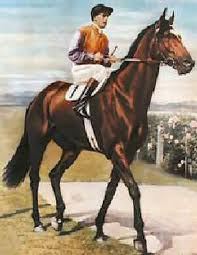 In his final column after 50 years as a racing writer, the highly regarded Bert Lillye named Bernborough as the best horse he had seen with Rising Fast, Dalray, Peter Pan and Tulloch “each deserving their own peculiar pedestal”.

Trainer Harry Plant: “Bernborough is as near perfect as a horse can be. He’s quiet and gentle. Nothing bothers him.he was the greatest horse ever to race in Australia.”

Jockey Athol Mulley: “He’s a freak. Once he starts to wind up nothing can stop him.”

Tommy Woodcock (Phar Lap’s trainer): “A great horse. A bulldog in a finish and too brilliant for Phar Lap in a sprint.”

Champion trainer Bobby Lewis: “He could be the greatest horse I’ve ever seen.”

Journalist and race-caller Keith Noud: “Bernborough was the greatest sprinter/middle-distance galloper ever produced in this country.”

Courier-Mail turf editor Joe McCarthy (Harvester): “He could carry the grandstand and win.” 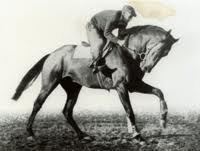 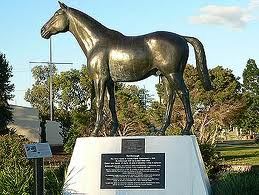